This write-up comes from dbest
from the BBGameZone forums – he entered the contest with a game
called “Tennis Masters”: 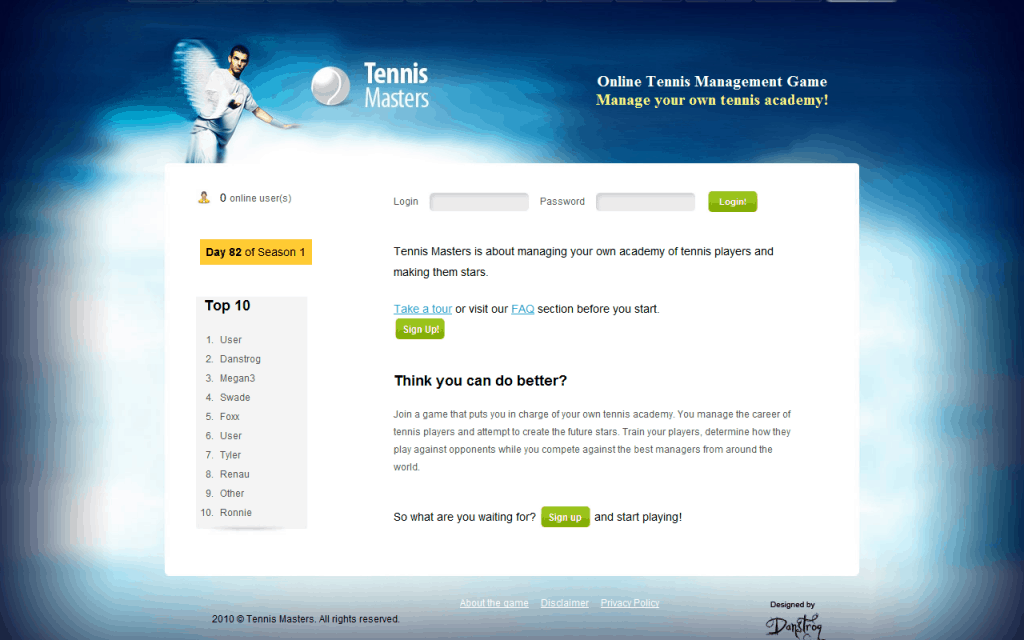 Tennis Masters is planned to be an online tennis management game. The
game puts the players in charge of managing their own academy of
tennis players and making them stars. The idea of the game originated
in August 09 and active development kick started in October 09. The
game is currently being developed by a team of two, using PHP as the
coding language.

We decided to enter BBGameZone’s Competition 2010 to complete a
Browser Based Game in a month. The competition deadline was an
incentive for us to complete the game. Before the competition
deadline, we had a rough base code that was ready. We attempted to
leverage the existing code base to complete the game quickly. During
the one month period, we put in a lot of effort in the Match Engine.
The Match Engine of the game is the core of the game and would be
responsible for simulating the matches. Since we realized that the
game would be judged based on usability, we decided to work on the
Help Manuals, so that the user would not be left clueless when
visiting the site.

As evident, since we did not complete the game in time, there was
plenty that went wrong. As both of us happen to be new dads, we had to
balance the time we spent on the game with the new responsibilities in
our lives. There were times when communication was lacking between the
two of us. As we were nearing the deadline of the competition, we
realized that we would not be able to complete the game and decided to
take it a bit easy.

In conclusion, although we did not complete our game in time, we
really cherished being part of the game making competition. We plan to
start our beta season in April and would be happy to see you join and
help us build a better tennis management game. The demo website is at
http://demo.tennismasters.org and our game development forum is
located at http://dt-games.net/gamesetmatch