Skip to content
Home Tutorial Getting Started With MongoDB (Python)

Getting Started With MongoDB (Python)

Getting Started With MongoDB (Python)

Now that I’ve extolled the virtues of using a NoSQL database, it’s time to put my money where my mouth is and show you how to use one.

To start things off, we’re going to build a super-simple site using the excellent Bottle Python framework, which is built for building simple sites like this.

This tutorial assumes that you already have a mongoDB instance up and running somewhere; if you haven’t done that already, take a look at the quickstart on mongodb.org.

First, download and install Bottle (it’s pretty easy). Once that’s done, we can start working on building our mini project.

Today we’re going to build a small ‘army manager’ site; users will be able to add, edit, and delete members of their army, and everything we need to track for the user will be stored in our mongodb database.

To start off, we’ll just make the index page return a template:

You may have noticed that instead of using the default template renderer, I used the Jinja renderer instead – which templating engine you use is up to you, but I prefer Jinja.

There’s a lot going on here – and if you’re new to Python, this code probably looks pretty scary. However, it’s pretty simple once you get the hang of it – here’s what we’re doing:

Most of these come from the Bottle library, and are designed to help us get our app off the ground faster – we imported random to be able to choose names for our soldiers, and pymongo to help us work with our MongoDB database.

If you navigate to your app right now though, you might notice that there’s a problem – we don’t have an index template! We’ll fix that by creating a template for our app, under templates/index.html:

As you can see, we’re not shattering any barriers with this template – but it lets us test our app, so it will do for now. Navigate again to http://localhost:8000/, and you should see something like this: 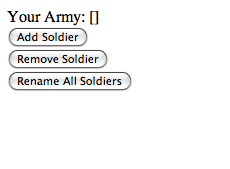 With our template all set up, it’s time to write our views – starting with the view that lets us add soldiers:

For the most part, this view’s pretty simple – we want it to be at the url ‘/add-soldier/’, and only responding when users POST to it (by clicking on the ‘add soldier’ button in our template). When a user clicks on the button and POSTs to this view, we retrieve their current army (making sure to default to [] if it doesn’t exist – this is important!), add a new soldier to it (by appending a random name from our SOLDIER_NAMES variable), and then update the user’s information in our MongoDB database. Finally, we redirect back to the frontpage so that the user can see their new army.

It’s important to keep in mind that when you’re using a schema-less database like MongoDB, you may not actually have the properties you’re expecting to, especially if you haven’t set them. With that in mind, always be sure to write your code in such a way that it will still work if a an object doesn’t have the property that you were expecting it to.

If you visit your testing page at http://localhost:8000/ now and click the ‘Add Soldier’ button, you should notice that your army has increased – there’s a new name there!

Now that we can add soldiers to our army, we need to be able to remove them as well. Let’s write a quick view to do that:

This view is just about the same as our add_soldier view from earlier, except that we’re removing soldiers instead of adding them before we write the user’s army into our database. We make sure they actually have soldiers in their ‘army’ array, and then we remove one if they do before writing their army back to the database, and redirecting back to the front page.

With that view written, there’s only one more to write – this one will live at ‘/rename-army/’, and update the names of all the soldiers in the user’s army:

As you can see, there isn’t much changed in this view either – we retrieve the user and their army, update the value of their ‘army’ array, write it to the database, and then redirect them. We use a list comprehension to update the name of every one of our army members, and that’s all that’s special here.

With that, we’re done! If you visit http://localhost:8000/, you should be able to add soldiers, remove soldiers, and rename soldiers – with all the data being stored in your MongoDB database.

If you’re stuck, or can’t seem to get it going, you can download the code for this tutorial at http://buildingbrowsergames.com/blog/wp-content/downloads/mongodb-python-1.zip.

Modify the ‘army’ array to store custom Soldier objects, which have a name and an attack value – when a user adds a soldier to their army, randomize both values (some of the work for this has been done for you – see the download above).